for the last 3 years, i have planted okra.  the 5ft+ plants with cool hibiscus flowers. some green, some red.  just an overall cool and interesting plant.  and it would be even better if one could just eat it off the plant.  by the way…NEVER eat it right off the plant.  you make that mistake once.  i liken it to eating glass.  odd tidbit, eating raw taro leaves has the same effect… (ask me how i know).  anywho, its one of those foods you grow and end up asking your self, what the hell am i going to do with all this?  well, after giving it away, i stir fry it with garlic and tomatoes, and serve it over mash potatoes, or, bread it in corn meal, and either ‘fry’ it in olive oil or bake it, and of course, give more away.  i did cut it up, bread it and freeze it last year.  which just reminded me, its still in the freezer. hmm. i suppose there’s always pickling it… not so much 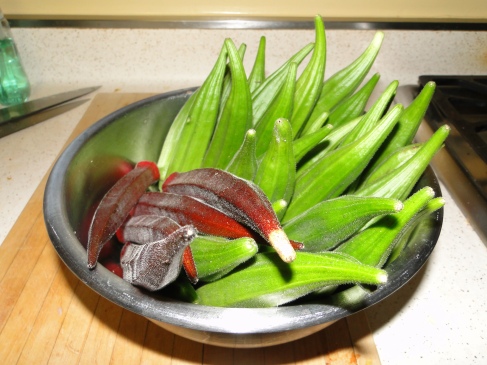 even though my tomatoes are just now producing, i feel like summer is gone and i’m already behind on fall plantings. it seems like i’m never caught up (of course, all the emails from the seed companies reminding you of that, doesn’t help). i know i should be thinking about planting garlic for next year…but didn’t i just harvest this years? moving on… i already cleared an area of the upper garden of its summer bounty. the black beans and green beans have been picked, and their beds have just been planted with soy beans and rat’s tail radish. 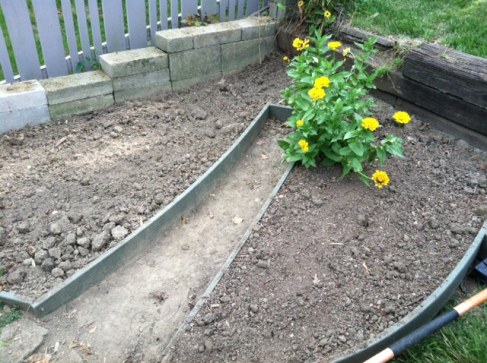 the poblano peppers are doing fantastic. they are so green and shiny. they seem to really kick it in gear as we move into fall. i’ll be picking and roasting some of them next week.

the christmas limas beans are coming along, although, by the time the beans have turn their red and white color, they are a bit tough. fun to snack on while in the garden, which explains why we usually do not have enough to cook and serve with dinner. the boys prefer them raw anyway. 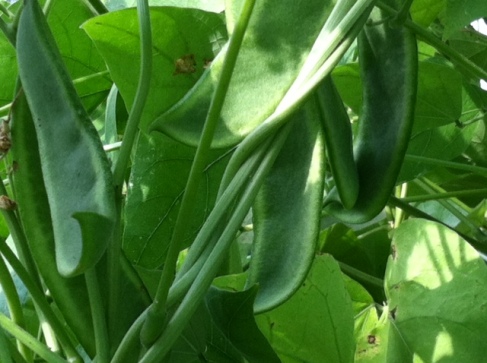 the marconi peppers are also coming along. we’ve picked some red ones, but have yet to get any of the orange ones. i think they will also produce well as we head toward the fall.

found a volunteer cucumber plant in the front yard. if you look to the bottom right, you will see one.

while visiting family last week, we also made it home with a big bag of grapes…(whether i wanted them or not).  these are grapes from my grandparents grape vines that have been there as long as i can remember.  these are the kind of grapes that,  as a kid you think, ” whoa, look how many there are…i’m going to eat the crap out of them,” and then you realized that they are full of seeds and a bit tart.  so, you bite into them anyway, swallow the juice, and spit out everything else.  so, what to do with what we brought home…and hell no, i’m not making jam/jelly.  instead, i remember grandma rufener making grape juice.  the coveted quart jars of sweet sugary grape juice with the funky looking grapes floating in them.  the ‘if you timed it right’, you could take home a jar after a visit to the farm.

so, thats what i decided to make.  a cup of grapes in the bottom of quart jars, sugar and water.  threw them in the canner, and crossed my fingers.  and when i finally opened up one of the processed cans, i  said “holy s**t”!  the smell was unmistakably familiar.  however…after drinking it, it was light on sugar/sweetness ( even by our low sugar standards). not too bad, but just not the ‘my teeth hurt’ amount of sugar i’m sure was used in previous batches.

we brought home a bag full of peaches after visiting “the farm,” and after a couple of days eating them as is, i was finally done.  the remainder of the peaches were divided up as follows…sliced up for a pie, smashed up for jam, and lastly, chucked down the hill for the chickens.  everyone was happy. 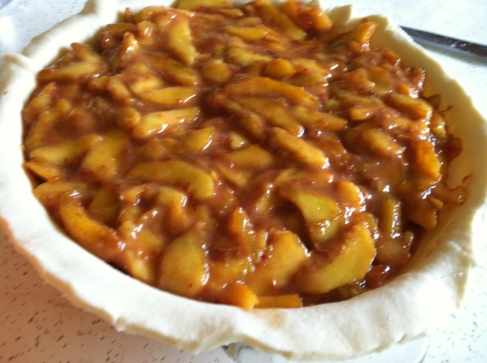 leave for a few days and you can really see the changes in your garden.  there were  tomatoes in the lower garden ready to be picked.  we filled up a small laundry basket with them.  i probably should have weighed the basket seeing how the handle was bending.  i am going to guess it was @ 10lbs.  not quite enough for me to bust out the canner, but enough to cover part of the table and start bagging some up for friends and neighbors.  i think this weekend i’ll either can them as whole tomatoes or i will make a marinara/spaghetti sauce.  the orange icicle paste tomatoes have yet to ripen, but when the do, i’ll make ketchup…mmm, orange ketchup.

i did use last years pesto sauce, this years basil and the yet undetermined tomato on our pizzas this evening.  the crust is whole wheat, not burnt, i swear. 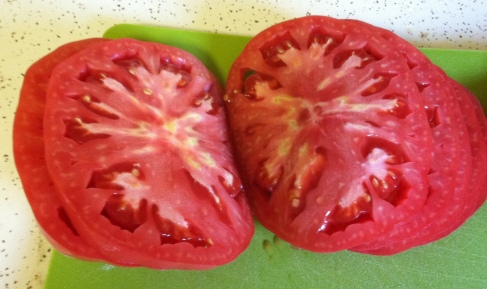 i’ve had some success with morning glories this year.  i came across an heirloom variety last september … ‘grandpa otts’. sagan and alice were helping with the black raspberries (in the background). 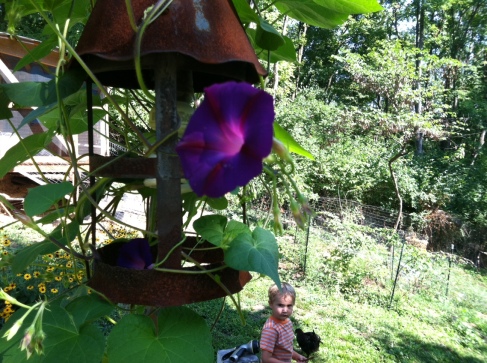 lastly, today is our wedding anniversary.  we have known each other for 22, been together for 20, and married for 10.  you bet i got me a cake!  it was the same type of cake we had for our wedding.  i only asked that they put ‘happy anniverary’ on it.  imagine my surprise when i opened the box and saw this…

day on the farm=trying to wear out 2 boys. dug potatoes in the morning, then the onions afterwards. had lunch. boys swept the barn, while I got all ocd on the potatoes. definately by size, definately. fed the cows. picked peaches. tractor ride while mowing. picked some flowers. picked more peaches. dinner, shower, and boys asleep before 7:30. If it takes all that to wear them out, I’m in trouble. 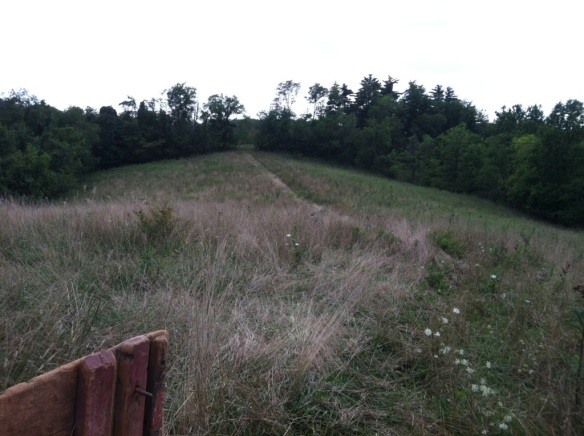 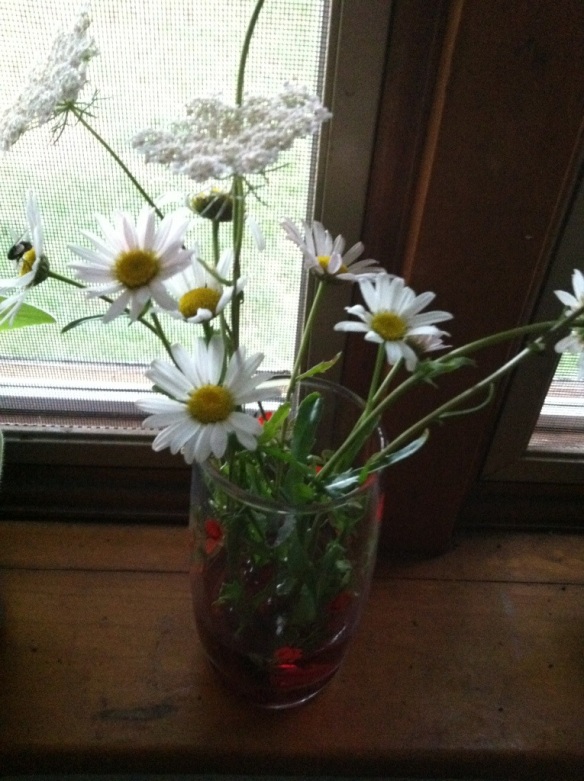 yesterday i was at gabriel’s place for a few hours. the shed in the garden was having a dedication after kids from the community arts center had painted a mural covering the entire shed. from eye sore to a piece of art. it looks fantastic. I also had a moment to weed and pick a few veggies from my plot. 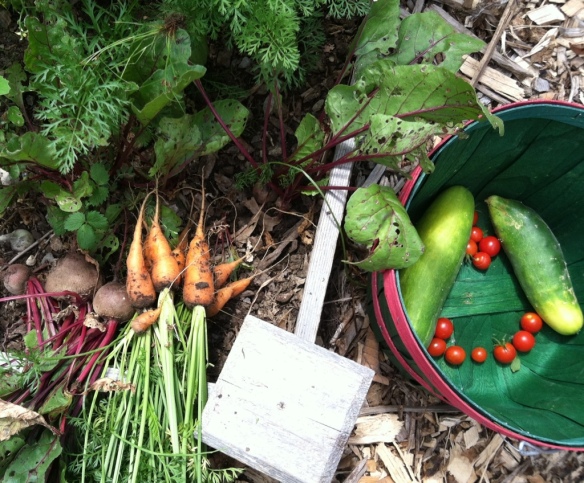 i sent an email to rareseeds.com (which is where i order my heirloom seeds) last night. after going through all my seeds, i am convinced that the jersey giant packet of seeds i ordered, and planted, were miss labeled.  still waiting to here back from them.  i do like whatever is growing, so maybe at least i can get them identified. 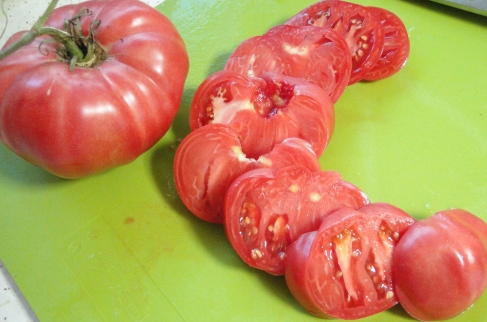 sort of kinda purple tomatillos.  they are not really purple at all.  the purple on the top of the pile was picked 3-4 days ago, then started to turn.  not sure what is going on with them.  there are also 2 purple jalapenos in that bowl.  more black than purple. oh well.

copper maran eggs are still small, but they are getting darker in color.

a little of everything.  tomatillos (not purple), violet jasper, the orangish tomato is the west virginia mt. princess, not so purple jalpenos, and a green zebra ( which is definitely yellow and green). 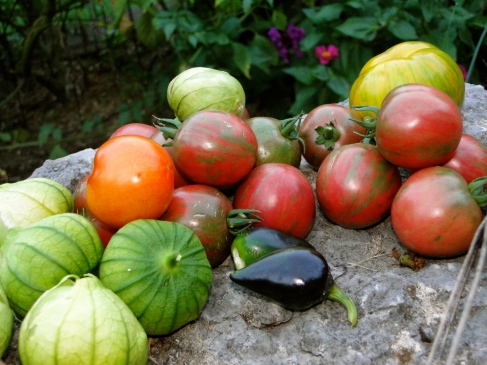 we had a very nice rain/storm earlier, so i suppose i won’t have to water tomorrow.  moving on…in case you did not know, ( and why should you), chickens don’t care if its raining, thundering, or lightening out.  here’s chicken jomo… out and about.  although its not actually raining when i took the picture, i swear she’s in the same spot she was when it was raining.  you can tell she been eating.  look at her breast area (crop area)…its HUGE. 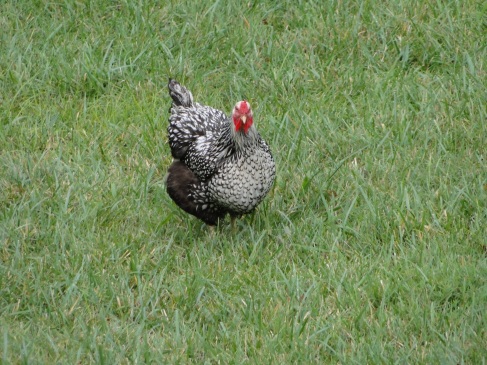 and while looking at her from the house, my son noticed a sunflower, poking up from above the tomatoes.